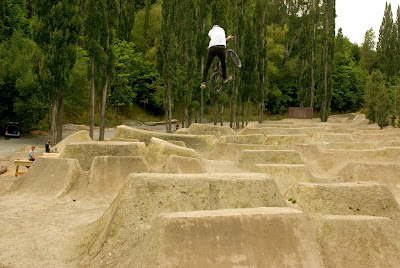 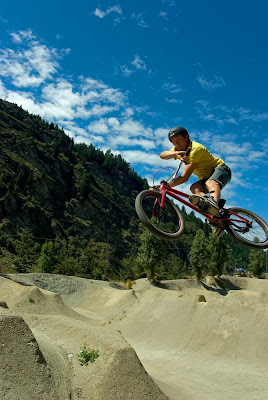 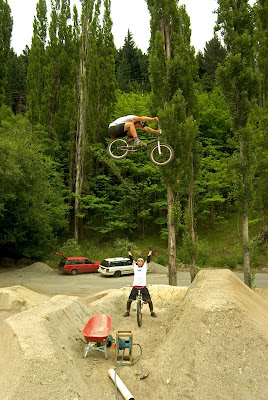 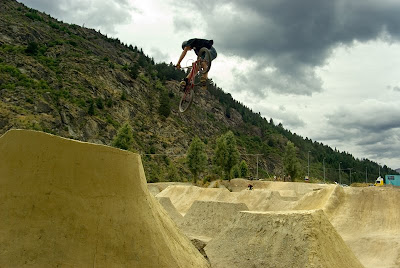 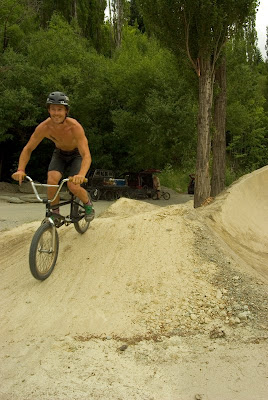 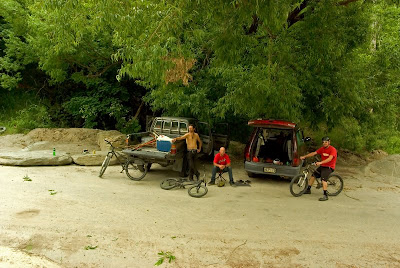 Well winters still not here, the sun is the boss & it's blastin us daily with it's warmth, which means the ground ain't frozen solid........so you kno what that means right? Exactly we can dig still till our hearts are content & were getting shit stacked up & playin' with that beautiful clay that's at the Gorge!

oh yeah by the way if ya ain't member of the Queenstown MTB Club get on it man, if you love & ride all the amazing spots they've build from the ground up, you need to give back & the best way to do that is by signing up & becoming a member which is all in support of the local QT riding scene wether you love trails or just plain wanna go fast down hill or peddle up a hill? Your choose = your fun. NUFF SAID, get involved & sign up, show your support!

It's almost a daily operation getting down to the Gorge with Nath, Lowell & Martyn (BIKE SMART kicks ass, ya dig) an were getting it done! What a team & were would we be with out our redbull hit aye Lowell? Oh to have wings right now. So dailing as much as we can b4 we tarp up is awesome, come spring it means less work & the fact of the matter is that we'll be roastin' it up sooner rather than later yeeeeoooow! Ya can't beat getting a head start on spring's heavy work load at ya trails any were on earth! But those who have trails kno this, right?

Big shout out to those who do come an help us out, you kno who you are (even tho there ain't many helpers & plenty of ya like to drive by with comments like "are they finished yet?" or "when do they open up again?''. Are they finished yet haha "what the trails, finished, they'll never be finished man only constant evolutiuon man!) If ya just plain stuck at work an ya can't help dig, well there's always the weekends to invest in ya summer fun, don't be shy & come help us out if were diggin', we won't bite, we'll only heckling ya some in good taste tho haha so bring ya sense of humour.

"Don't fear hard work it's good for ya & it all ways pays off"
eat sleep & breath TRAILS all year round, if ya can't ride 'em, build 'em right!
embrace the flathead & get it done!

Here's a sweet little edit from Belgium by Florent Delahaye Cheers for the wee vid Mikey dam cool to see what happens when ya drink loads of coffee & beer at ya trails in Belgium, yup growth & boy has ya woods looked after you! Yes it's Mikey roastin' the trails in the vid just in case ya confused. Have a great summer dude & we'll be seeing ya soon when ya get back down under later this year! Dig on!

Filmed and edited by www.florentdelahaye.com
In collaboration with the blog www.i-love-that.com

Jed Mildon a name that everyone will be droping right now globaly! BOOM! History in the making right here in lil ol NZ & who said Kiwi's can't fly ha, big ups to ya u beast! I wanna see a quad flip now....i'm sure that's insite aye! Thanks to UNIT for the edit!
Posted by TRUBMX at Wednesday, June 01, 2011 0 comments 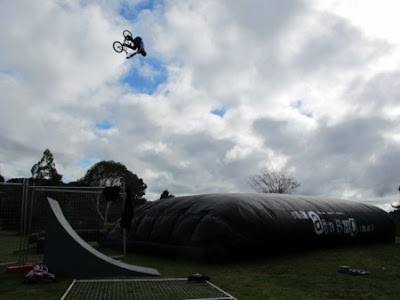 Jed having a few practice runs, can ya get any higher Jed? I bet ya can man! RESPECT!!
oh yeah it's dam rad to see Jed setting a new world record 1st man, so so dam RAD for BMX in NZ & the world & who would've thought a Kiwi would claim the trip flip, Jed's the perfect BMX ambassador for NZ! Were all super psyched for ya JED, big ups from all the diggers here @ the Gorge! We watched it on TV like so many Kiwi's would've & for the rest of ya out there, no doubt this shits gone viral on the net, it's expected!! Big ups also to Iona & the Air bag crew here's what they have to say!!