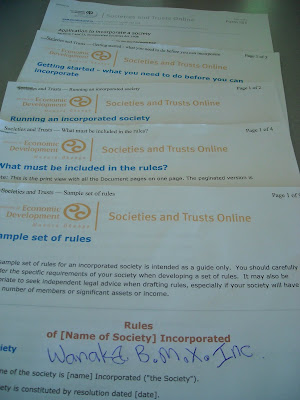 boring paper work but it's gotta be done if ya wana be all legit!
It's time to form a BMX club which will be a voice for BMX'ers up here in wanaka as the LWCI (which is a cycling club, which should be called a MTB club) just don't give a shit really, i just phoned up the president of LWCI & he was to busy to talk about us BMX'ers, it's to late then, are they blind? there's loads a kids switch'in from MTB to BMX up here daily, they don't see it cos they don't buy from the local wanaka bike shop's as they only carry crap completes with no technology in them at all & could be used as small boat anchors! So the local kids go online an shop with mum's credit card, get the good shit, fit the new shit & if they can't, i do it for them for free & show 'em how to keep there rides dailed. So we need a legit PC voice, not what this blog has to say! Next thing the lame homo MTB riders in wanaka will say i'm a pedophile cos i hang wit kids hahaha (there not all homo's here on mtb's only some & they know who the are) I've talked to the QLDC & Queenstown MTB club's pres an my mind is made up, we need a BMX club to get what we want! An we all know what we need..........

WE NEED PUBLIC TRAILS THAT KICK ASS IN WANAKA NOW!
(for uneducated MTB trick huckers/riders to read -Trails are not single tracks - in the bmx sense of the word trails are sweet jumps that flow nice, berms, rollers, bombholes, transfers & hips yes those difficult to judge awkward angles hahah etc etc that you to can ride if ya get on a BMX or if ya remove some springs, i'd like to see that haha)

The latest crap to come out 443's dumb ass bosses mouth Dan is this " if you want to build BMX jumps, do it somewhere else" yep Dan is talk'in out his ass alright (i don't like this guy either so this must be a personal attack, nope he's 15 years behind man) about Losemore which he has flattened & shut down to rebuild which is fine of cause as it sure needed some major rebuilding & drainage put in, props to him maybe? But it is a public jump park which is albout the kids & should be catering for all types of bike riders aye? So if the LWCI will not cater for us BMX'ers or listen to the local kids about what they'd like to see built we will just have to go for some of the funding the LWCI goes for & get us a public piece a land thru the QLDC to build some public trails & maybe a BMX race track (it's a Olympic sport now! think big picture summer training will bring $ into the small wanaka economy), even let the kids have there say that's what it's about man the youth of today are the future! Queenstown has ie the gorge rd trails! Which we all know caters for the kids, big kids & even bigger kids plus MTB & BMX! UNITY!

all the words below are just boring local political biker shit that i put up with in this retarded tiny hick kiwi town yes i was not born here & neither were most of the people that live here, imports like me, so what's local then? 2, 5, 7 or 10 years liv'in here in wanaka hahaha, thought i'd post up anyway, kinda needs to be said!
The LWCI's draft strategic plan for 2007 & beyond that Jewels (443) gave to me back 07 when we were all kinda friends while we were all originally planning losemore (then all that sticky forest shit went down, we all lost loads of hard work & i broke my pelvis @ do'in dumb shit at d skank park) did not include a word on BMX but i noticed they were to try an contact some roady dude to include road cycling, bmx is apart of cycling isn't it (check pics below, yes a took pics of all pages of that strategic plan draft) So i wrote a very nice piece to complement this strategic plan on BMX, i gave this also to the president of LWCI, lamely it was never included in the final draft........so here goes the wanaka bmx inc, 1st it was trubmx totaly un pc & now wanaka bmx inc which will be totally PC & legit, it'll be known as the wanaka BMX club & we'll still help fund raise for the skank park for sure...but we need crete & dirt to roast, yes i'm still building my private trails but i don't wont every dumb ass riding 'em,plus it'll not be kids stuff & the land owner does not want loads of people on his land riding them unless i'm at my trails, for legal reasons a disclaimer will need to be signed to ride 'em also. Only a small local crew will be welcome an they know they must dig if they wana ride 'em woods! 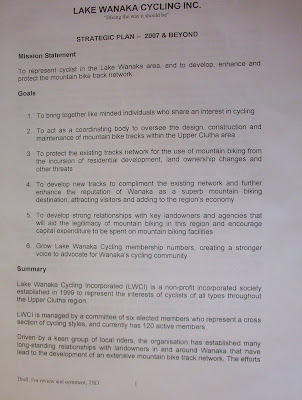 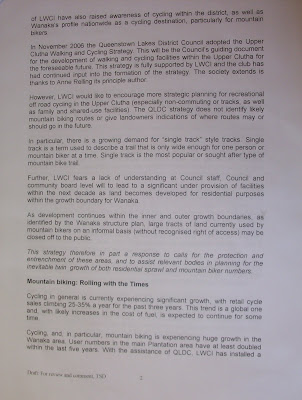 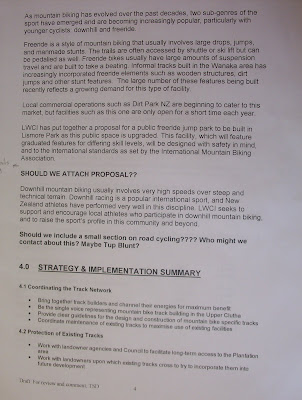 I didnt read all of that but if you need any help in any way just give me a holla.

yo Asher, you should read it all man, interestingly boring stuff haha cheers bro, but i think i've got the paper work side of it all sorted i only need 16 signed on members over the age of 18, an i've got them all & the local BMX kids parents & mates who ride, so i only have to put the rest together ie clubs goals, objectives, rules etc etc boring shit really but i'm do'in it & learning all about how to get shit done legaly!

haha that was epic in true jimmy style. sign me up for the club see you next weekend

yep no more fuck'in around & deal'in with toss bags man, i'll save a spot on the committee for ya sam! Catch ya next week then.