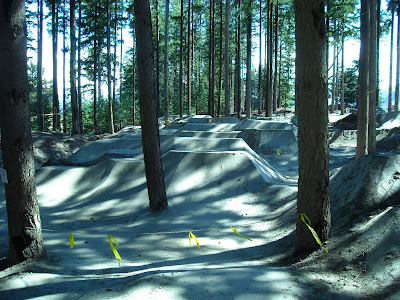 click to enlarge, scuffs & scrapes by some ratty kids i chased off, there mum & dad thought it was a jungle gym? an good to have to climb around on WTF? 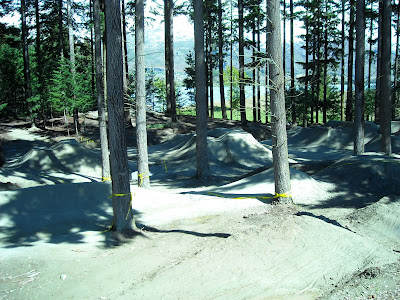 It's been well over a month since the old lines were flattened in the basin area & the new lines are look'in good, it's open, i got to have my first session, it's rolling nice & smooth, just a bit slow & soft still....Monty, Levi, Hids & Elmo are gifted little shredaz, they're gonna rip up over summer & 7 yr old Alex is a dam little ripper! I'l try get some pic's, bit hard tho as riding's way more fun! There's still a few local douche bags carrying beef & wanna get all aggro on some of us in front of the kids man, what are they think'in? Such a bad look for them! Violence solves nothing & only causes more problems! What does a Nga Tahu land claim have to do with me anyway? Go talk to the Treaty of Waitangi office or Office of treaty settlements man, the Sticky forest is done & dusted, get over it & move on ie take a look around.... look at the BIG picture, ya only live once so ride ya bike & have fun

The bigger outside line could do with allot of love, right now the basin area is where the fun's at, there's no rocks or road sticking out all over the place either, 2nd time round it's been built good, psyched. There is one tree tho that's right in the middle of a one of the last landings roll out, very dodgy & where are the rubbish bins? it hasn''t been open a week an there's rubbish all over the place, shame man! Lismore's a fun asset for the whole community to enjoy so show respect fools! take ya trash with ya. Lismore will be officially opened on the 24th Oct with a jam. There's a few more locals diggin on private land around here also & The Gorge Road trails in Queenstown will be open soon, so big up's to Nath & his boys in QT, the gorge does sure kick ass, i hear The Gorge is up for some awards also, rad!........more trails=more fun! Don't forget the Month of Mayhem 2010.......... yeeeeeeeeeww