Yo diggers, slackers & trend whores out there, heres some Austin, Texas trail steeze for ya! Some of you kids out there don't kno that Austin is kinda like the BMX capital of the world, but most of us old big kids do already kno this......here's some insight into the trail scene & just how it is, Big up's to the all the boys shovel'in & shovel'in, get'in shit done in the Austin trail scene......& the world! Respect is due! Keep ya digs..hidden deep in ya woods! 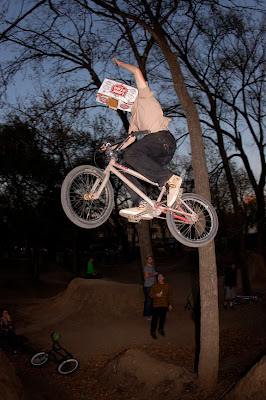 3.LOCAL SPOT-PARK? I never make it out to the parks.
-TRAILS? My trails, my friends trails.

4.DESCRIBE THE WAY YOU RIDE IN ONE WORD? Happy.

5. IS YOUR LOCAL SCENE IN GOOD SHAPE-PARK? WHAT ABOUT TRAILS? In Austin there is the bmx scene, and then there is the trail scene. The bmx scene is busy getting Hollywood flat bill Mr. Tight Pants pro all over the place and trying to roach our trails. The trail scene is mostly grown men who work all day and just want to have some peace and quiet in the woods. The bmx scene seems loose and ever changing. The trail scene is tight and always changing for the better. There isn’t one pro bmxer that actually builds trails here, so anything you see out there is an act. 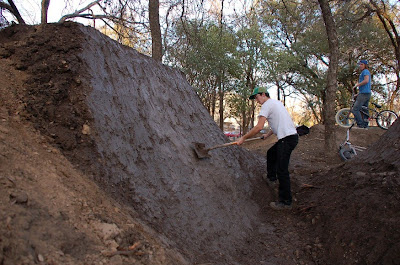 6.IF YOU COULD GO TO ANY SPOT IN THE WORLD TO RIDE & HELP DIG,WHERE WOULD IT BE-PARK? TRAILS? WHY?

I have been to Pennsylvania and seen the motherland. I took a couple little rocks out of some of the most famous lips just to be able to hold a piece of the trails in my hand all the way here in Texas . If I was going to go any where though, it would be to some random beginners spot to help them make their trails better and use the best trails that are already established as inspiration.

7.IF YOU COULD HAVE ANY FEATURE YOU WANTED AT YOUR LOCAL PARK/TRAILS ,WHAT WOULD IT BE? A water hose or a food garden.

8.HOW OFTEN DO YOU GET YOUR SHOES MUDDY DIGGING? Only when it rains. The rain does not determine weather I dig or not. If the dirt is rock hard and dry I just stomp that spade into the ground and get syked.

9. DO YOU OWN YOUR OWN SHOVEL/SPADE? Yes. Bronco Flat Heads. I made a Bronco bumper sticker so the world can know. Search the internet for a shovel called the “excavator” by True Temper –holy s**t, this is the stealth bomber of shovels. We finally got one at the trails. 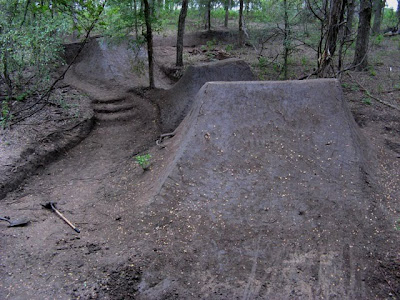 something i've been work'in on.

10.WE ALL KNOW THERE IS HANDFUL OF WRITTEN/UNWRITTEN RULES OF ETIQUETTE SURROUNDING TRAILS PARTICULARLY,PROBABLY BECAUSE OF THE AMOUNT OF WORK THAT GOES INTO THEM COMPARED TO CONCRETE......DO YOU BELIEVE THIS ETIQUETTE IS A GOOD THING? ie "NO DIG NO RIDE" OR THE IDEA OF "BREAK IT FIX IT" POLICY'S THAT ALLOT OF TRAILS HAVE IN PLACE........DOES IT ENHANCE OR HINDER??

11. WHY DO YOU THINK PEOPLE ARE RELUCTANT TO DIG, HOW COULD YOUR SCENE BE TIGHTER WHILE KEEPING SUM LEVEL OF EXCLUSIVENESS?

I don’t think people are reluctant. I think that wanting to create something from nothing is built into some peoples DNA. Get this: When I dug at 9th street , people would be there riding the lines dry and hacking things up. As soon as I would walk towards the water hose and shovels every one would take off. An hour later, they all come back and I’m still dialing in the lines so I can ride smooth trails. They would just sit there under the tree watching me bust ass. When the trails where properly marinated, I would go up the hill, take a run, and by the time I got back up the hill 15 of those dudes where up there ready to shred - and acting like its all good! WTF? I use 9th as a reason why exclusiveness at other trails in my area is necessary. I think there should be a place for the vets so beginners have something to look up to and earn respect to even get close to. Since my crew is not looking for any more help, our rule is: If you want to ride, go build somewhere else and you can come ride! Some people might not understand that idea, but I think it’s beautiful. It automatically inspires people to build trails. Every one is capable of helping at exiting trails or walking out into the woods with a shovel, so we’re not discriminating against anyone.

12.WHAT IS YOU FAVORITE TIME OF THE DAY TO RIDE? Right after the sun goes down and it’s still light out. 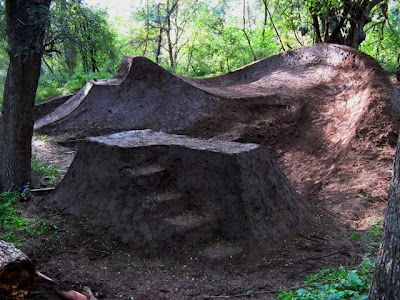 newly built section just wait'in to be slapped in, ridden & hidden in woods some where in Texas?

14.WHAT HAS BEEN CHALLENGING YOU LATELY? STUNTS, TRICKS, POLITICS IN YA SCENE OR JUST SHIT WEATHER?

“The Grizznando”, I’m trying to do a tweaked grizz air with my left leg and simultaneously take off my left hand and reach over the bars, past the tire, all the way until I grab my right foot.

15. IN YOUR OPINION, HOW COULD YOUR BMX SCENE BE MADE STRONGER LOCALLY?

I don’t even know. Austin is nuts.

16.AND LAST BUT NOT LEST, I KNOW YOU LOVE RIDING TRAILS AND HAVE DONE ALLOT OF DIGGING IN THE PAST,WHAT IS YOUR RECOMMENDATION FOR RIDERS WANTING TO GET IN ON THERE LOCAL TRAILS, BUILDING AND RIDING....,CAN YOU LIST 3 THINGS THAT YOU FEEL ARE IMPORTANT?

I’ve been at the trails for over half of my life and gone from jumping the curb in front of my house to training legends at Posh. If there’s one thing I’ve learned along the way its: If you’re a soul digger, you’re a soul digger. If you find some trails, just be yourself. If it doesn’t work out, you’ll just be like one of those dudes at 9th I just called out. If you don’t like to dig, or don’t have time to dig, pick another hobby. Three most important things: Be yourself. Don’t take it too seriously. It doesn’t matter how good your trails look or even if they ride good, as long as you build your own and have fun - you own the world.

I would also like to add, that if you are reading this, try to donate money to my injured friend Ben K. He’s one of those types that own the world on a regular basis.