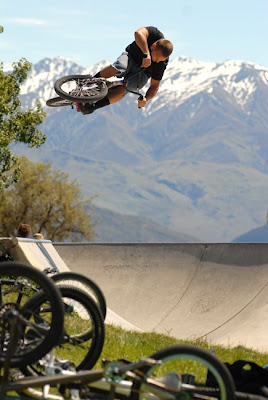 Dan blast'in the wanaka mini
I just got sent thru the 3rd plans that Jason Parks, builder of the QT park has done for the park here in wanaka an they are look'in dam sick, nice little 3d animation, there's a full pipe corner an it's BIG, last time i mentioned full pipe it was not a possibility but who know's. The 2nd were some plans from some uther dude that came thru a few days ago but there all drawn by hand and make the park look like the biggest park on earth hahaha nice tho don't get me wrong, well drawn up fa sure. An the first plans were kinda based on Hastings in Vancouver an they looked sweet! So the 4th set will be done by Convict Design.
I'd like to show the little 3d animation of the plans Jason has done but i can't hahaa well not just yet anyway, as were still wait'in on the plans from Convict to come in. Then it's a matter of a few meetings with the Wanaka Skate Park Committee to decide on the best ideas from all the plans submitted then once we all know what were like'in i guess they'll be some final plans drafted up then...... i'll be able to show ya all, that's if Eddie lets me, come on Eddie if we show more peeps what's to come it'll help heaps with the fundraising side of it all!!
So don't forget the next "Build The Park Jam" here in wanaka is on the 25th April so if ya around get along an shredd it up for sweet cause, prizes ...who knows hahaha fun in the sun OH YES!!! Ride on BMX lovers & dig trails.....right.....safe!
Posted by TRUBMX at Thursday, March 26, 2009