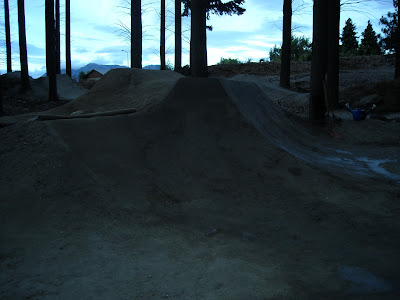 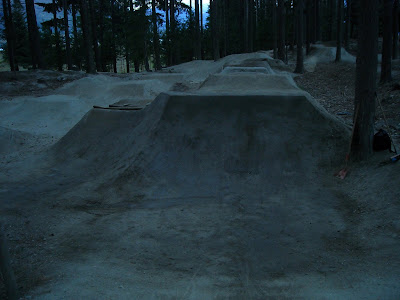 fix'd up.....this place is slowly start'in to run smooth, just so many dam stones in the crap dirt used (an old graded up road) if it's in the back yard why not roll it & look after it aye! Dial that shit in eh!

it's been dam windy..no surprise tho that's wanaka for ya, so it's safer being grounded, so that local public jump park "Losemore" has been get'in a little love ie picking stones out of trannys & landings, sort'in some lips out, drainage & sort'in out the sand pit last landing, a big ol "NO SKIDDING" & " WATER & SWEAP B4 RIDING" sign is needed badly! WATER is all this place ever needs, the local kids need to get on to it water & sweap the lines b4 they ride 'em, just a little initiative is needed ie get some watering cans fools dam just take ya folks water can or buy one, it's soo dam thirsty & exposed to the bitch wind, which dry's it all out. It seems that the boys that built it have realized that they need to sort the drainage out, bit slow on the up take tho haha but good to see! Winters not here just yet so been lazy on digg'in @ the hideout, while the sun is out i think it's worth soak'in it up, but that'll all change as winter kicks in! Nuff dribble from me tho what do i know aye hahaha! DIG!
Posted by TRUBMX at Sunday, March 29, 2009