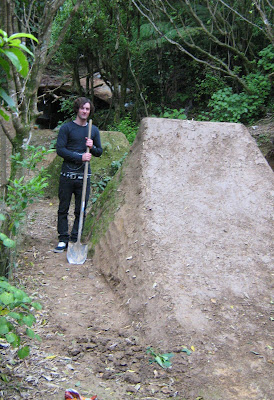 2.BIKE ? Take Ivy but ideally I'd be running a deluxe.
3.LOCAL SPOT-PARK? Paraparaumu or Waikanae
-TRAILS? The Burrow
4.DESCRIBE THE WAY YOU RIDE IN ONE WORD? Shitty
5.YOUR LOCAL SCENE IN GOOD SHAPE-PARK? WHAT ABOUT TRAILS?

Local park scene round here is great, wellington has to have some of the best skateparks within an hour radius, even locally we've got Paraparaumu, Waikanae, Otaki and Puk bay.
trails wise there isn't that much, there has been a few spots that have popped up and disappeared again. The one reall good spot locally was Island bay but when the flat there got sold so did they. Other than that i've heard a few new spots have been started in wellington so looking forward to see whats been happeneing there.
Locally there's the burrow but progress on any of my projects is going slow considering i'm doing most of the work myself.
.....WHY DO YOU THINK PEOPLE ARE RELUCTANT TO DIG, HOW COULD THE SCENE BE TIGHTER WHILE KEEPING SUM LEVEL OF EXCLUSIVENESS?

I think its mainly because the digging season falls in winter and people just don't want to spend the small amount of good weather on digging when they could be riding. Another thing is that most people seem the be really affraid of trails and if there isn't something they want to jump they aint gonna help dig.
Really the big thing is that people are fuckin lazy they want something for nothing and trails can't give you that.
6.IF YOU COULD GO TO ANY SPOT IN THE WORLD TO RIDE & HELP DIG,WHERE WOULD IT BE-PARK? TRAILS? WHY?

This is a hard one, if it were just one spot I'd have to say catty woods, seriously if you watch any of there videos they've got there shit dialed, of course i'd bee shitting my pants riding anything there.
If it could be any country then definitly England, such a variety of trails spots, pretty much anything you could want and of course i'd be willing to help out with any amount of digging there.
Can't for get Posh though, it's pretty much one of the remaining spots from the previous trail era. 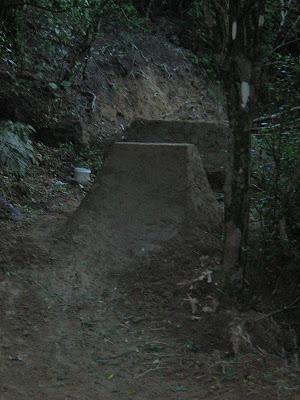 7.IF YOU COULD HAVE ANY FEATURE YOU WANTED AT YOUR LOCAL PARK/TRAILS ,WHAT WOULD IT BE?

This is probably bending the rules a bit but a feature id want is a less steep and more expansive area at my spot. If I had that I could build anything I wanted
8.HOW OFTEN DO YOU GET YOUR SHOES MUDDY DIGGING?
I try not to dig when it's too muddy or the dirt just doesn't pack right, but usually I get a good layer of mud that needs to be scrapped off the bottom of my shoes.
9.DO YOU OWN YOUR OWN SHOVEL/SPADE?

What kind of question is this? Of course. I prefer a rounded shovel end over a square head. Mine is like the ultimate work horse for me, digs bulk dirt pretty well, I use it for shaping and compacting and it's light weight so no noodle arms.
10.WE ALL KNOW THERE IS HANDFUL OF WRITTEN/UNWRITTEN RULES OF ETIQUETTE SURROUNDING TRAILS PARTICULARLY,PROBABLY BECAUSE OF THE AMOUNT OF WORK THAT GOES INTO THEM COMPARED TO CONCRETE......DO YOU BELIEVE THIS ETIQUETTE IS A GOOD THING? ie "NO DIG NO RIDE" OR THE IDEA OF "BREAK IT FIX IT" POLICY'S THAT ALLOT OF TRAILS HAVE IN PLACE........DOSE IT ENHANCE OR HINDER??

In some spots it's a given, larger spots definitly need to keep the rules other wise things just get to over run, whenever I go to other spots I like to help out a bit if I can.
I don't mind so much at my spot, Chances are if you know about them you welcome to ride them. At my spot it kinda hinders things to have rules, i've got trouble enough to actually find people to ride them with me haha. My only big rule is don't ever ride a spot without the locals and in somecase only when the trail boss is there.
11.WHAT IS YOU FAVORITE TIME OF THE DAY TO RIDE?

any time from mid day onwards, who likes to get up before mid day anyway.
12.TYRES ON YOUR BIKE.....ALL ROUNDERS OR SPECIFIC??

Grip in the front slick in the back, thats how it's always been. 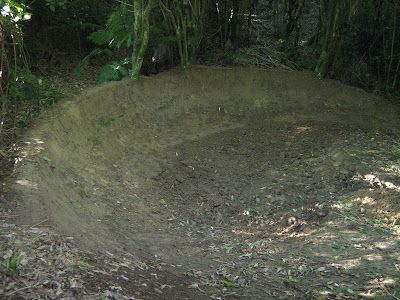 13.WHAT HAS BEEN CHALLENGING YOU LATELY? STUNTS & TRICKS? POLITICS IN YA SCENE OR JUST SHIT WEATHER?

Mand we seriously had almost a month straight rain. I'd just fixed up this lip id been working on when it started raining. One day in the middle of this rainy period i went down to check it out and found it collapsed, i was pissed but build it up again anyway. We had maybe one sunny day and I thought it would have been enough to dry it out a little. Went back down a few weeks later when it had stopped raining to check it out again. Fuckin thing had collasped yet again, by this stage i was pretty much in a full on rage and almost decided to spot digging at the spot all together.
Luckily i calmed down a bit and rebuilt it and it's looking way nicer than it did before and it's held up this time so i'm happy.

15. IN YOUr OPINION,HOW COULD THE BMX SCENE BE MADE STRONGER LOCALLY?

Our local scene is pretty tight a the moment, don't really see how it could get much better. A few more jams here and there would be good but i'm not complaining
16.AND LAST BUT NOT LEST
I KNOW YOU LOVE RIDING TRAILS AND HAVE DONE ALLOT OF DIGGING IN THE PAST,WHAT IS YOUR RECOMMENDATION FOR RIDERS WANTING TO GET IN ON THERE LOCAL TRAILS, BUILDING AND RIDING....,CAN YOU LIST 3 THINGS THAT YOU FEEL ARE IMPORTANT?

The key thing is inspiration. Big props to the deluxe crew. I feel that since they've started up they've really helped a revival in the trailscene world wide. mainly through there frequent updates and it seems the more you see the more you want to give back the the trailscene.
Other things are finding a good spot. seems to be quite hard around new zealand because our native bush is so thick and makes for a damp enviroment and land is hard to come by but it can be done.
The Last thing is finding a tight crew thats pretty like minded with ideas and willing to dig.
Posted by TRUBMX at Monday, July 13, 2009