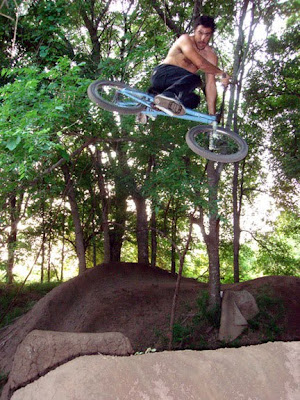 Ruben wit a frang'in ru-whip somewhere in Texas not OZ?

Ruben Alcantara has alway's been one of my fav riders & has to be one of the raddest riders EVER, always a treat watch'in footy of him ripping & shredding it up, his interview up on Fly Bikes is rad cos it's all full a NZ footy. Ruben is the king of New Lynn skank park, he seethe's style, full a etiquette, loves trails & had a dam good time in NZ......how could you not tho! So here's few of my fav Ruben vid's, chiao!

what the terrible 1 Joe Rich has to say "Six weeks, 1 regluar sized back pack for each of the 2 of us, 1 super 8mm camera, 1 DV video camera, 1 35mm film photo camera, 2 bmx bikes, $400 in train tickets each = 1 amazing adventure. We had the most basic of plans . . . Leave Malaga, Spain by train, and arrive in Prague (Czech Republic) six weeks later. No day was ever mapped out before hand. We'd take a train to a new city, leave the station upon arrival, and see what we could get into. Some cities we stayed for days, others just over night. "Chance" and "Wonder" were our co-pilots. Exploration and adventure go hand in hand, add in our loose schedule and we had ourselves one amazing journey" . . . .

"This trip was taken by myself and Ruben Alcantara almost 5 years ago. It was put out along with an Etnies Road Trip video that came with Dig issue number 52. Because it was being burned on a hard copy, I had to use different music for the second half of the Train Trip. This was the music I originally edited it with. This played all last year on the Bicycle Film Festival Tour around the world. I've gotten a number of requests to put this up online. So here it is, Freaky Friday February 19th, 2010. Enjoy!"