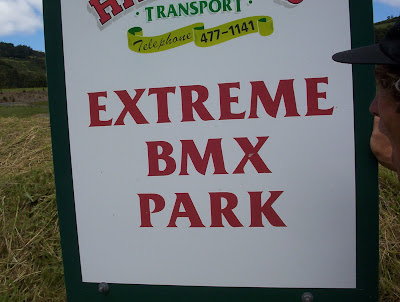 The rumour that's been floating around for a couple a months about Dunedin's EXTREME BMX PARK (what's with the E word? forester park BMX track) getting some dirty stunt jumps is a fact ,that's awsome but the prob/bonus? is the builders of Wanaka's Lismore Fresstyle Mountain Bike Park seem to be the crew building them or are they? hang on if Lismore Freestyle Mountain Bike Park or Hawea Flat's Pump Track/jumps are anything to go off well i really hope that they get it right in Dunedin cos it's all right there, a pro job is expected as racers kick ass & already know how to jump a dirty tranny.

Well who ever gets the job will have loads of good clay so that's a start as theres a mountain of clay next to the track, but don't ya think some diggers/builders that know about BMX or at least ride BMX (abit) should be building the new lines in Dunedin? Let's hope the racers/jumpers (not the wool kind either) are involved! $75,000 for Lismore & $35,000 for extensions @ The Gorge Jumps in QT.......mmmm you only need to look at either to see were the quality & pride in workmanship is. The Gorge kicks Lismore's ass ! Straight up anyone who says it don't is a bit retarded possibly hahah, Lismore's maintenance has been up to a couple of young kids an there doing a much better job , they actualy now how to pack dirt! Go the kids for showing some initiative!

But bring a broom & a rubbish bag if ya wana roll Lismore as it's a sand pit, rubbish all over the place, seriously lackin water & really has not been finished (if ya gona spend a heap of $$$ like what has been spent on Lismore you'd at least expect the job to be completed 100% , not the case at Lismore tho is it, a half assed job,! That's my opinion anyway an if ya don't like it tough & yes i do spend sometime patching tranny's, picking up rubbish, sweeping sand/stones & watering, the LWCI needs to pull finger sort a few bins out & run a course for the kids that use the jumps on HOW TO NOT LITTER! I'm sure somebody asked me for one haha an opinion that is, what's yours? or is it just a big bad romour? Stay posted.
oh and beware of THUNDER BIKES if your in wanaka an need ya BMX fixed their the dodgiest, don't know what there on about (BMX wise i'm reffering to) & will most defiantly rip you off, i've seen their work ie since when do ya glue headset cups into a BMX frame or any frame in fact or tell a kid he needs to buy a new rim , so it's easier to lace a new hub into the old rim haha spokes maybe but not a rim when there is nothing wrong with it , BMX's are so simple man no rocket science here! Support a real NZ BMX shop that know their shit Revolutionnz ! they wont rip ya off, they'll hook you up with what ya need, check them out & shop online with ya moms credit card it's so easy..... just don't get caught hahah DIG TRAILS !
Posted by TRUBMX at Monday, December 29, 2008

whoa that's news to me, i hope it's not the 443 crew, as it'll be as bad as that Lismore Joke Park! Why arn't the builders of Gorge Road doing the work in Dunedin as they have always made jumps that work real sweet. Just dig ya own trails & hide them.That's the way.

hahaha i was told of a big dude with dreads that builds mean jumps maybe he should be the one behind dunedin jump park mmmm will watch this one with interest. oh thats a nice shot from sam bellow how long ago was that???

i know who ya mean, the job is still open & up for tender so nuthing has been locked in just yet , so who knows who'll be doing the diggin/building, call Hall Bro's if ya wana know more about Forrester Park, the numbers in the photo above, oh an Sam's shot of Kane is very fresh not even a week old.