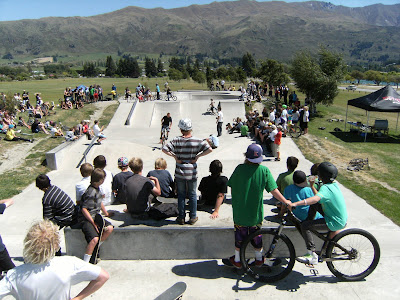 the over view of the 1st annual Tim Hales Wanaka Shredathon , good vibes all day !! 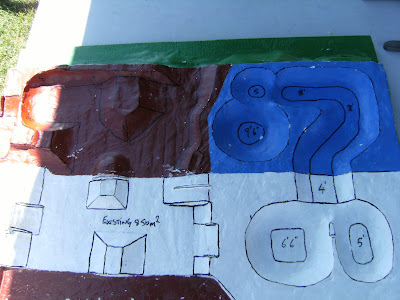 plan , white area is what's here now & the maroon/blue areas are what where raising $$$ for ! 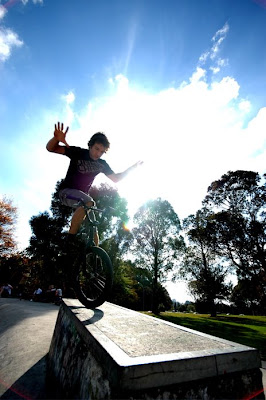 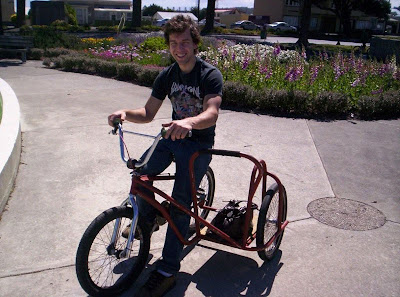 Alright peeps there's been alot of people around the globe commenting on the Demon- Tim Hales Shredathon vid , yep there were more than 3 boys at the comp , but you don't see that in the vid footage from the shredthon at all really , the footage is good & so is the editing but the essence of the day was not captured as such, so i'll be loading up a vid to Vimeo shortly & on this blog !! I really hate politics even when you try to avoid 'em , well it still happens !

The Demon name on the vid happened cause the producer of the vid made a private deal with them an got paid , the president of Wanaka Sk8 Club, Eddie Spearing ( top bloke man ) made a good point "What did demon do for the event/park" well the answer is this , they were at the shedathon handing out drinks , which were much loved by the kids , they supported the event along with all the other sponsers with product/prizes. Demon are not being singled out at all , but they were the only non BMX/corp sponsor tho , an this whole mess is bit of a communication break down by all involved , learning curve fa sure ! The vid mos definatly helps to expose the event (globally) which is cool , but i'm not into big corp-pirate sponsers they might have $$$$ but it's not about $$$ for me & yes we are raising $$ for the park , confused yet i am , leave a comment, it's always good to hear what everyone has to say, you don't have to use your name if you don't want to! (it's about fun on bikes) , I am the organizer/ dude running The Tim Hales Wanaka Shredathon & maybe some of the $$$ Demon paid out for the vid needs to be put back into the community ie Wanaka Sk8 Prk extensions fund mmm yes maybe as that would be the right thang to do, time will tell !

So with all this going on i'm gonna make it really clear that for the future Tim Hales Wanaka Shredathon's there will be NO big bizz/corpirate sponsors EVER !!! This event will remain 100% BMX only !! We BMX's are the industry BMX is owned by BMX'ers these days !! 100 % Rider owned brands , company's , mags as sponsor's an maybe a few small local operations/businesses from the local Wanaka community, gotta hang on to it an keep it underground , an not sell out man !!!! gota keep it real man !!! Ride on !! An remember it's about raising awareness & remembering the late great Tim Hales , R.I.P. brother ! PEACE !
Posted by TRUBMX at Monday, December 01, 2008

that is well average!!!

totally agree with that man keep it tru bmx styles!!

The end of the day who gives a crap about who got paid. The people that showed and rode had fun and personal agenda's were never really considered. The man in consideration only looks out for himself and at the end of the day doesn't probably give 2 shits about bmx and the local scene.

Good to hear what ya all have to say !! When it's a community project that the kids will benifit from (along with us big kids) it does matter tho who gets paid ie FUNDRAISING !!!

The whole event was put on by myself & a few awsome volenteers none of us made a cent, as we all do this kind of thang for the love of it !! When some one does choose to cash in it's a matter of principle !!

Every little donation will help us (Wanaka Skate Park Committee) get the new extentions sooner rather than later ! Yeah at the end of the day it's all about coming together, hav'in fun, riding BMX & showing some respect for the late Tim Hales ! Keep those comments coming peeps !

I'm more than happy to donate the cash ( when it gets paid )straight to the Wanaka Skate Club. ( This was always in my mind )

All I was trying to do is document the event professionally through photography and video as requested. It is my profession, and it takes alot of time and equipment.

Comments that I don't give a shit about the local community and money is my only motive? Get off the grass, and stop posting annoyonmous internet posts. You have no idea what goes into my work.

well that about wraps this up then doesn't it ! You don't need to give all the $$ Tim , 50/50 split will be dope half for the park & half for your time & effort ! Big learning curve for us all !! Let's all move on & look forward to next years Tim Hales wanaka Shredathon 09 !! It'll be even more fun & there will be abit more communication amoung those involved ! ride ya bike & have fun daily !!! breath out ...yep Peace

oh yeah it still stands tho only 100% BMX for all futre T.H.W.S.'s & they will always be a fundraising event for the Wanaka Sk8 Park !

James, grow up. By living and participating in a Western society you've already 'sold out'. Go build a hut in the woods and hunt/gather if you want to 'keep it real'. Holding a '100%' Bicycle Moto X event at a SKATEpark just isn't going to cut it.

With that said, 'What did demon do for the event/park?'

You obviously have no idea how much it would have cost you to personally contract a production company to professionally cover the event and a marketing company to promote the video all across the internet. Well there's your answer - that's what Demon did for the event and thanks to them you'll probably get a whole lot more people turning up next year.
Show a little gratitude (and intelligence!).

right o then mr anon , i do have hut in the woods at some dirty trails i dig at & i huntergather when ever the fruits of nature are inabundance . I also signed your buddy on to shoot for a nice story inna BMX mag, an the photo's are amazing. In a passin comment i mentioned " hey maybe you could get some footage " i planted a seed & well it grew into the vid in disscussion. I also had my blood bruther Tim film all day.

I never asked anyone to make any web vids, or promote the event one bit , that is something anyone can do with the internet man.Even i might be capable to do so, hang on i did organize the whole shredathon , that took only a little intelligence tho ! An you have your opinion , who's next then aye. I hope peeps don't get to childish with there comments , an grow up maybe , did Peter Pan ever grow up ?

grown'in up is what,the expected norm for us humans in western society ! Why would you want to grow up ! That's draconian , even by todays standards, an such a Babylonian concept ! Nurture the child with in daily were posiblle & have an amazing life doin so !