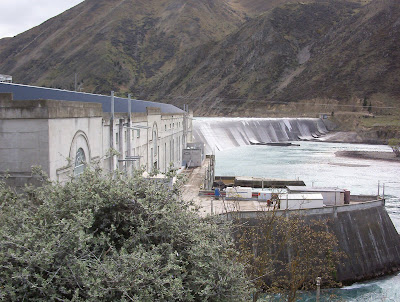 The Wiataki Dam ! hows the size of the tranny here ! Matt Hoffman would be well into a tow in ! 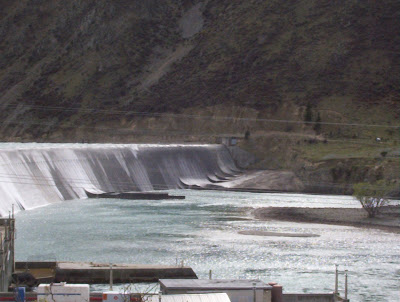 this is what i'm on about on the far side , take close look , hit the photo ! Good luck tryin to air this 50 foot monster bro's & bro ette's !

I've pointed this place out to a few boys in the past , finaly i thought a couple a snaps would be a good idea to maybe get a few boys ampted on the giant 1/4 on the far side , more of a giant wall ride an has by the look a perfect bit of a roll into the dam wall with some mad steeps to carve over !! The only reason theres water all over the place is cos it was so dam windy on sunday that the waves were overflowing the dam wall !!

The flow of the Waitaki River after the dam is not to bad & theres a perfect spot to ferry across about a 1 km from the dam & with water levels being so low , some time in the next month or so would be a good time to get a couple of rafts/kayaks an ferry a few boys & bikes over along with a few brooms to clean up the roll in an sesh it !! It's well worth the bust if ya get busted that is , i had a good snoop around an jumped a couple of fences an i saw nobody around & i was tresspassing forsure ! It's not a full pipe but still it looks like ya can roll it for sure !

I'm back there in a week or 2 to cross the river an roll/ scope it out !!! Anyone keen ! Hola back @ trubmx@yahoo.co.nz if ya wanna come check it out ( no paprazzi please) just riders ! I have gear to film it tho don't worry bout that !