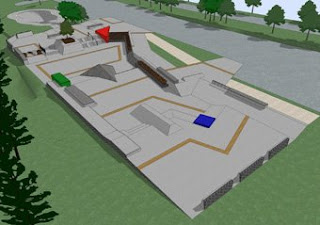 Well after hearing about it, as you do when ya hangin out with the 20"crew in QT. There was a rumour that bikes were to be banned from the new QT sk8 park. So we jumped the startgate an started a online petition "equal rights in QT skate park", this lasted less than 12 hours ha ha ha!!

After a phone call to the QLDC's Russell the morning after seting up the petition, well it "was news to him about banning bikes from the new park". So i guess next time theres a panic about banning's of any kind, it mos def pays ta talk to the people in charge of the local bylaws!!!!

sorry no photo, but the new QT prk is looking real streety an all they need to do is pour all the flat concrete an make the peanut bowl,Big up's & Respect ta all the charitable ogannizations (they've givin loads of $$$) Sk8ters behind fundraising (wakatipu skate club) , an of course all the peeps doing all the hard work, can't wait ta have a roll.

The QLDC is also slowly tryin to remove all the fun little spots from it's queenstown streets, i guess that's why the new park is a street plaza look a like, real cool idea but i don't think it'll stop peeps from playin in the real street aye!!!! have fun how eva ya roll
we also heard the City Impact Church was given the old wooden ramps an they plan to do them up an put in place some where in Frankton, may be close to the impact church as they've got a few acres of land to play with, choice aye have a good ol prey ta the most high, then a nice ol shred around the revamped old ramps!!!
Posted by TRUBMX at Sunday, May 04, 2008